Improving Voluntary Weather Observations from Ships in the Arctic

The Arctic Ocean is a hotspot of global climate change. The Arctic region has experienced three to four times more warming than the average Earth. This has resulted in thinning and shrinking sea ice cover, lengthening of seasonal ice-free periods, and warming of the oceans during the summer phase. These changes are most apparent in the Arctic coastal seas where most human activity takes place.

Consequently, shipping in the Arctic has increased. According to the Arctic Council’s PAME working group, ships entering Arctic waters increased by 25% between 2013 and 2019. Most ships are merchant ships and bulk carriers, but an increasing number of tourists also sail in the Arctic. 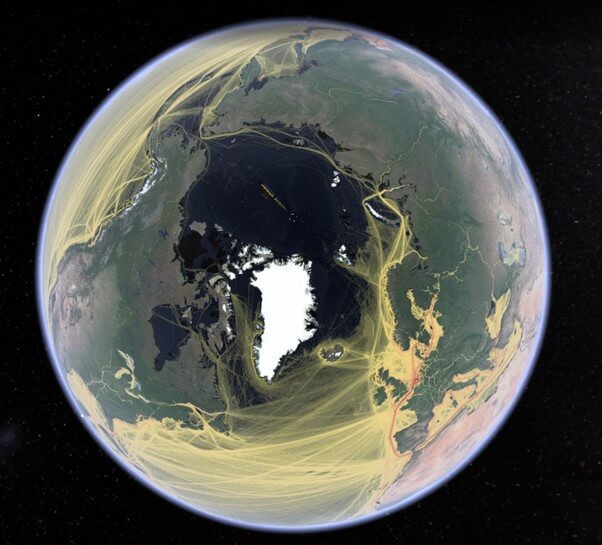 Ship tracks based on global AIS data in the North Atlantic and Arctic Ocean in 2020 (Courtesy of Jukka. Pekka Jalkanen/IMF)

The state of the Arctic Ocean is monitored by satellites, airborne measurements, automatic weather stations, surface buoys, ocean moorings and research expeditions. However, the current monitoring network was designed to serve primarily for climate monitoring purposes. In particular, the real-time observation network is very weak compared to other maritime areas due to the difficulties in maintaining automatic systems in the harsh polar conditions.

Voluntary meteorological and oceanographic observation from ships sailing the oceans has a long tradition. However, only a few ships sailing in the Arctic collect environmental data. There is enormous potential for commercial vessels to serve as platforms for environmental measurements and fill gaps in monitoring the state of Arctic coastal seas.

Benefits – Why is it crucial to continue and improve voluntary observations in the Arctic Ocean?

The obvious advantages of ship-based measurements in the Arctic are that they provide vital in situ measurements in areas where weather, ice and ocean information is limited or completely absent. Sharing observations allows all operators sailing in the same maritime area to be better and more equitably informed. In addition, observations are used in ice services and assimilated into weather models. This would significantly improve the overall quality of ice maps and forecasts, contributing to the safety of operations in the Arctic Ocean and beyond.

These data are not only necessary for the safety of navigation but also crucial for the calibration of satellite data and for the validation and verification of numerical models. While research expeditions in the Arctic Ocean only cover localized areas for very limited periods of time, maritime traffic in the Arctic can contribute to the continuous acquisition of data on a variety of routes.

Finally, European and North American countries have committed to an open data policy. All measurements, satellite data and forecasts produced by government agencies and research organizations are essentially made freely available and easily accessible, to enhance entrepreneurship, innovations and scientific discoveries. Adding data provided by the maritime industry to this palette would certainly stimulate the development of industrial applications for route optimization, emission reduction and risk management.

Solutions – How to contribute to the collection of environmental data in the Arctic Ocean?

Shipowners can contribute to the collection of environmental data in the Arctic Ocean in three ways:

While many ships already collect basic meteorological and oceanographic data for navigational purposes, this data is usually stored on a local computer on the bridge. Instead, this data could be automatically sent to the data server, helping to monitor the Arctic Ocean. One solution is to use the European Marine Observation and Data Network (EMODnet), which is an infrastructure for collecting and disseminating marine data. EMODnet has developed tools to digest all publicly available data sources.

The EMODnet Data Ingestion portal facilitates the ingestion of marine datasets for further processing, as well as publication as open data. Ultimately, it contributes to the development of services to society. It mainly focuses on datasets that are not yet processed. EMODnet data is used worldwide by forecasting centers and research institutes. It also provides a portal to view Arctic observation.

Bathymetric data is also needed for the Arctic Ocean. To this end, the International Hydrographic Organization (IHO) coordinates Crowdsourced Bathymetric Collection (CSB) of vessel depth measurements. Observations are based on standard navigation instruments, while engaged in routine marine operations. The CSB is a valuable tool that can complement the more rigorous and scientific bathymetric coverage achieved by hydrographic offices, industry and researchers around the world.

To date, there is no automatic measurement of sea ice characteristics. Vessels operating in ice-infested waters could implement a visual ice observation system where officers on the bridge take notes on ice conditions in accordance with the “Ice Watch” protocol. Observations are emailed to a database. Ice observations are then displayed in real time on the Ice Watch website, accessible to all users.

3) Installation of automatic ocean monitoring systems on board:

Surface ocean measurements require the installation of an automatic “FerryBox” ocean monitoring system at the inlet of the cooling water system. The “FerryBox” measurements have been deployed with great success in various vessels operating in Europe and North America, but the only operational system in the Arctic is installed on a vessel transiting between Tromsø and Svalbard.

The guiding principle for shipboard measurements is that data should be freely available to the public. Considering the open data policy adopted by a large majority of government agencies and research organizations in North America and Europe, it is clear that not adding data from the maritime industry would be a significant and damaging waste. . A data sharing agreement between ship owners and established international bodies such as WMO, IHO or EMODnet would facilitate this effort, thus multiplying the societal benefits of voluntary environmental observations in the Arctic Ocean.

Jari Haapala is head of the marine research unit at the Finnish Meteorological Institute.

The views expressed here are those of the author and not necessarily those of The Maritime Executive.

How to deal with misinformation in online communities